As Christians, we often define a person’s “godliness” by their actions, words, acts of service.

Many books, blogs, Bible studies, and radio programs are centered around the character of the Proverbs 31 woman (from the Bible).  Her actions are described in great detail.  Perhaps, the assumption is made that if we do more of what the Proverbs 31 woman did, we will also be a “mini-Proverbs-31-woman.”

As if one can be by doing…

The concept of good works is so ingrained within our culture and certainly within our religious institutions.

There’s plenty of Biblical basis for this teaching.  The book of James in the Bible says that “Faith without works is dead.”

There are stories like the “Good Samaritan” in the Bible, which show that God finds physical acts of service the definitive way that we demonstrate love.

It is in the ordinary acts of daily service that we wear the skin of love.

Why then does it seem like as Christians we are often so busy doing good works to the exclusion of quality and quantity time in God’s Word?

Why then does it seem that the family gets the “leftovers” of our time, while the bulk of our time and energy goes to the “ministry”?

Why do ministries seem to be experiencing high levels of friction and tension and in some cases the permanent erosion of friendships and relationships?

Have we become people that are more captivated by religious activities, actions, and duties then we are by Jesus Himself and the simple love of His people?

Are we so busy running ourselves ragged over so many needs that we haven’t stopped to inquire whether or not they are specifically something to which God has called us?

Do we stop to question why we do the things we do?

As someone once said, “What we say ‘no’ to is just as important as what we say ‘yes’ to.”

The Bible also records a short story about Jesus’ visit to the home of two sisters and the brother:

38 Now it happened as they went that He entered a certain village; and a certain woman named Martha welcomed Him into her house. 39 And she had a sister called Mary, who also sat at Jesus’[a] feet and heard His word. 40 But Martha was distracted with much serving, and she approached Him and said, “Lord, do You not care that my sister has left me to serve alone? Therefore tell her to help me.”

41 And Jesus[b] answered and said to her, “Martha, Martha, you are worried and troubled about many things. 42 But one thing is needed, and Mary has chosen that good part, which will not be taken away from her.”

“Mary has chosen that good part, which will not be taken away from her.”

Martha was busy trying to prepare a meal to meet the physical needs of her guests.  Her goal was a good desire: she wanted to take care of her guests — that’s what a good hostess does, right?

On the surface, it could have appeared that Mary was selfish and lazy.  She sat at Jesus’ feet while Martha appeared to be doing all of the work.  If we judge the two of these woman based on their actions, it would seem like Martha was the most “godly” in action, until she opened her mouth.  Then we begin to see perhaps a complaining spirit.  Yet, we could say she was being a leader.  She was giving directions to those under her to keep things running smoothly.

Jesus’ response though was so unexpected in many ways.  With His ability to discern the hearts and intentions of people, rather than their outwards actions, Jesus “cuts” to the heart of the matter.  He addresses the reasoning behind Martha’s actions and complaints: fear and anxiety.

Jesus then praises Mary because she chose the better thing.  What did Mary choose?  She chose to sit at Jesus’ feet.

Mary chose worship (that is when we truly “sit at Jesus’ feet”) over works of religious duty.

Mary chose humility over a haughty spirit that desires to gain status within religious “spheres” by outward displays of service.

In the book, Think Differently, Live Differently, by Bob Hamp, he describes in allegorical fashion the story of a young man who was born to trapeze artists but was lost as an infant and was raised instead by farmers.  As a young man, he is found by his birth-parents, returns to live with them, and begins to train for that which he had been “born”: being a trapeze artist.  In this book, the author is comparing humanity to this young man.  (We were created for something so much greater than what we live in our natural, fallen state.  We were created to walk in perfect harmony and freedom as God’s sons and daughters.  Yet through sin, we are separated from God and begin to live as if we are someone else’ child…  God’s desire is to bring every man, woman, and child back to Himself — into a life-giving, life-transforming, and freeing life as His sons and daughters.  Through Jesus’ gift of salvation, we can begin that process, but then we must learn how to live as His sons and daughters.)

In his book, Bob Hamp, says the following:

“When he slowly told his father that he knew he could never develop the skills that the others seemed to have, he waited … for the reply of disapproval that he had grown accustomed to on the farm.. This time the sharp words never came.  Instead, his father’s eyes welled with tears, ‘Son,’ he said, ‘ we thought you were dead.’

‘Of course, I want you to learn these things,’ his dad responded, ‘but it is not for me that I want this, it is for you!’

‘Son, the trapeze is in you, the high wire is in you,’ the father said.  ‘If you learn these things you will be learning who you are.  I want you to learn so you can become who you are , not so you can make me happy.’

…Tears filled his [the son’s] eyes and his throat felt thick.  They really did not need him to perform in order to be pleased with him … He remembered again why he had decided to leave behind the life he knew.  He did not leave because he wanted to work hard and be a disciplined acrobat … He did not leave to impress anyone … He left because of something in him not because of something in someone else.”

In I Corinthians 13, we read that love is the foundational principle.  Love is what God calls us to.

19 We love Him[a] because He first loved us. 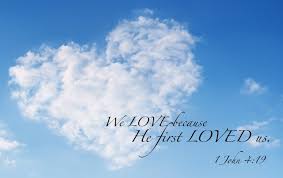 What was the greater thing that Mary chose?  She chose Jesus.  She chose sitting at His feet because she loved him.  Because He loved her.  She was “abiding” in the presence of the One Who loved her.

5 “I am the vine, you are the branches. He who abides in Me, and I in him, bears much fruit; for without Me you can do nothing. 6 If anyone does not abide in Me, he is cast out as a branch and is withered; and they gather them and throw them into the fire, and they are burned. 7 If you abide in Me, and My words abide in you, you will[b] ask what you desire, and it shall be done for you. 8 By this My Father is glorified, that you bear much fruit; so you will be My disciples.

Abiding in His presence speaks of a complete and utter trust in our Heavenly Father and surrender to Him.

It speaks of an attitude of receptivity and of obedience.

It speaks of being full of His presence and of being led by Him — not by our own selfish, fearful, and proud ambitions.

Today, Jonathan was having a conversation with Will, saying that he (Jonathan) “loves mommy very much.”  Jonathan talked about how he married “Mommy” (me).  Will then said, “You’re not Mary.  You’re Joseph.”  I think Will missed the context…!